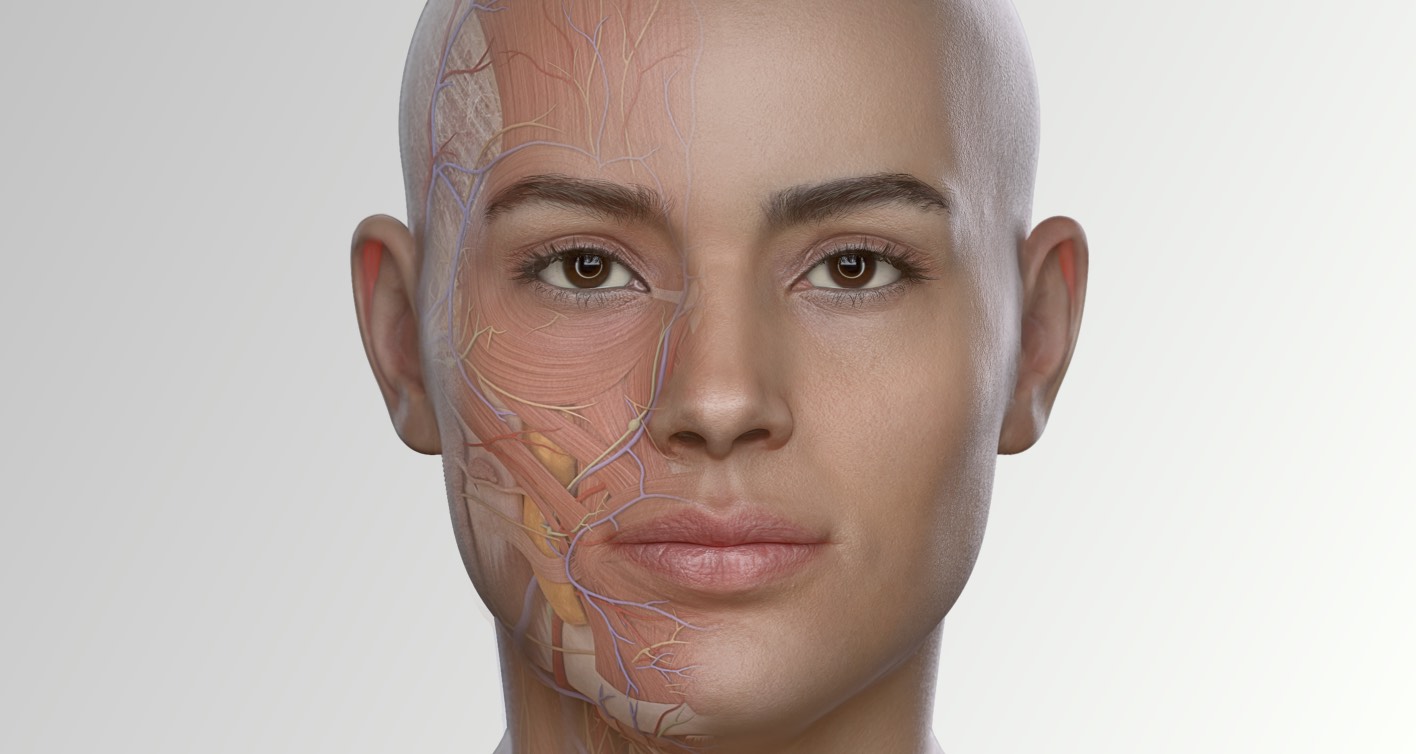 It is a fact that female anatomy has been historically underrepresented in the study of the human body. From the 1500s, at the beginning of the explosion of anatomical studies, religious and legislative regulations against the use of bodies for anatomical study limited the supply of bodies to convicted criminals. Most of these criminal bodies at that time were lighter-skinned and male [1]. By the 1700s, those limitations were less of a consideration, and societal bias became a big factor. Anything other than Northern European male bodies were positioned as bodies that didn’t have merit on their own, but only as comparative models, with interesting points of deviation from the Northern European male. The female in particular, was primarily studied only in relation to their reproductive organs.

At Complete Anatomy, our vision is to create an experience where the male and female anatomy are equally represented. Our goal is to be the leaders in the field, using the very latest research and not just highlighting where the female differs from the male, as traditionally taught, but promoting equality through choice, with the goal of disrupting a hierarchy of sexes. Ultimately, we want to provide the opportunity for Educators to teach an entire anatomy course using the female model as default, rather than the male, should they choose to. By providing this option, we want play our part in disrupting the gender bias which is proven to present itself in clinical practice.

In creating our new full female model, the Complete Anatomy team made it a priority to create a model that aligns with the very latest research in this field, moving the conversation on from a simply comparative one. Each area has been meticulously researched independent from the male, to make our female model distinct and accurate.

One approach which is regularly observed in the our market is to simply replicate the male skeleton and shrink it, adding in the female reproductive organs. The team felt this would not align with our vision. It would not reflect the nuances of the female skeleton and how it presents, especially in anthropological instances. We wanted to represent the female as comprehensively as possible and set about researching points of sexual dimorphism seen in female bones using resources from forensic anthropology. We referenced anthropological data from specialists’ texts, academic papers, and customer feedback. This information was discussed in detail with subject matter expert Yasmin Carter Ph.D.

Once a brief was made on a specific region, a specialist medical writer worked closely with a 3D artist to craft the sexual dimorphic details apparent on the female.

The skeleton is the architectural base on which all other anatomy is built around. It is clear from the study of forensic anthropology that most major differences exist within the skeleton. It was very important to us to add the distinct differential details in the bones that would be seen in real-life.

These distinct characteristics are clearly seen in craniometric landmarks of the skull, in the shape and size of the pelvis, and in the angles of long bones. For example, female skulls present much less pronounced landmarks on the surface of the skull, than typically found on the male, such as the glabella, occipital protuberance, and mastoid process [1,2].  We carefully modelled a new skull from scratch to visualise these important landmarks.

The pelvis also has very distinct differences when compared to the male counterpart. The overall shape and sexual dimorphic landmarks such as the ventral arc, subpubic concavity, and medial aspect of the ischiopubic ramus were adjusted for this reason [3,4]. The female skeleton also presents a distinct “Q-angle” due to having typically wider hips. The angle at which the femur meets the tibia at the knee is typically greater in the female than in the male, so that the knees are oriented under the trunk in a configuration efficient for locomotion [4,5]. As this is more pronounced in females, the team worked to display it accurately and hope to update the male to have a slight angle in the future.

Once these core characteristics were modeled, we could then start modeling musculature, neurovasculature and organs.

For context, anatomical resources such as illustrations and digital products often represent the muscles larger than is typical in real life, in order to help students easily identify them, and in turn facilitate learning. In order to represent the largest demographic of females, we built our model to represent healthy, ambulatory females, aged between 20-80 years old, who typically present 30-40% less muscle mass than males [6,7]. This meant the entire model profile needed to change, which led to remodeling almost all structures, from muscles to vasculature, to account for this adjustment. Our goal is for the new female model to express an appearance that allows for effective teaching, but also represents a muscle mass more typically prevalent in females.

Significant work has gone into improving the accuracy of the model when looking at female-specific organ sets. For example, structures in the breast tissue have been remodeled to give it a much more realistic appearance, as well as to improve on the accuracy. Historically, the female breast has often been represented in a state of lactation for the purposes of learning [8,9]. For the team, this placed an over-emphasis on one particular stage of reproduction that was only true for a small percentage of females, a small percentage of the time. So, we took the initiative to reevaluate how this should be presented to students and modelled non-lactating breast tissue as our standard.

In another example, we have remodeled the axillary tail to be much more identifiable as it extends to the axilla. A structure such as this has important clinical correlations when distinguishing signs of breast cancer. Details such as the distribution of mammary glands, and the angle of suspensory ligaments, were also considered carefully when modeling in 3D. For example, the majority of glands are distributed in the lower portion of the breast as one would see in real life, as opposed to being scattered throughout the breast. It was important that we accurately represented the vertical alignment of the suspensory ligaments to the skin, as this plays a part in clinical correlations in cases of inflammatory breast cancer, where tugging on these ligaments causes the orange peel dimpling effect on the skin. When making these improvements, references included Gray’s Anatomy 41st edition and insight from Yasmin Carter Ph.D.

We had significant work to do when remodeling the external genitalia [10,11]. It was evident that our previous female prosection model did not correctly reflect the shape of the clitoris. As a product which prides itself on accuracy, this was an area that did not meet our own standards, and we took on customer feedback which reflected this. With help from Yasmin Carter Ph.D., we have remodeled the external genitalia. Together we worked to modify the clitoris so that it demonstrated its classic, ‘J,’-shaped appearance. In surgical training, this information is vital due to the quantity and intricacy of nerves and vessels of the area, which are at risk of being damaged. Lack of detailed representation of this area has left many with insufficient knowledge in the neurovasculature of the clitoris [11]. We hope this new representation in 3D is especially useful for those going into gynecological practices, midwifery, and plastic surgery, but also for healthcare training in general.

To give our customers a head start on using the female model for creating their own curriculum, we’ve added a set of female model bookmarks to our Atlas.

For this release, we have paid particular attention to the Thorax, Pelvis, Abdomen and Full body regions ensuring we had representation of these areas. As our new Atlas was launched in July 2021, the non-sex specific regions were created on the male model as this was the model available to us at the time.  However, we will be reviewing how we achieve full representation in our Atlas with our customers following our female model release.

We discussed the concept of sex specific filtering and indicators with our subject matter experts, and for November we have decided not to include them. They advised that for non-specific regions the sex is not relevant for most disciplines and sex specific regions are often taught side by side. Therefore, to give the best representation we didn’t want to make sex a differentiating factor. For our sex specific content, the naming of the content is distinguished enough that you can tell the difference. This decision will be reviewed as part of our vision to achieve equal representation.

A priority for the team was that the female model felt as representative as possible to the female population. To this end, we regularly reached out to our female colleagues to ensure a steady stream of feedback. In one exercise, we sent a survey, along with visual aids, to the female employees of 3D4Medical, focused on how they interpret the proportions of the model, and how lifelike and representative it felt for them. With their feedback we again made adjustments where needed, to tie us back to how the 3D model was received by those it seeks to represent. We recognize that even after this broad consultation, our female model is representative of only a narrow segment of the demographic who identify as women, and we are currently in the discovery stages of a project to explore how we can better represent more variety within this group.

To get some broader input outside the walls of 3D4Medical, we presented our work and findings on the female model project as part of a workshop at the global Women In Tech conference in July 2021. Product Director Irene Walsh walked the attendees through the challenges and proposed solutions and engaged in an open discussion about some of the key decision points along the way. This opened up a thoroughly engaging dialogue, with wide support from the attendees for the project, along with robust discussion and concrete outcomes which were also acted upon and incorporated into the model.

At Complete Anatomy, we put anatomy software into the hands of health science students on day one of their training, and with this privilege, comes great responsibility. As a team, we take this responsibility very seriously. We are committed to playing our part in the changing and evolving nature of anatomical education into the 21st century, and our role in challenging previously-held historical biases in the on-going social conversations of our time. We are grateful to be granted the opportunity to visualize the results of important research carried out by outstanding contributors in our field.

If you found this blog post useful, you might also enjoy learning about the differences between the male and female bony pelvises.